Some readers surely still remember curve sketching in mathematics¹. As students we learned how to use mathematical methods to find gradients, inflection points, points of intersection, as well as maxima and minima. Challenging, but not impossible to master.

We also deal with curves in the world of finance although, strictly speaking, they are not curves in the sense of continuous functions but clusters of points, which the viewer connects like dot-to-dot puzzles: yield curves².

Now, there are many theoretical models that try to describe why a yield curve has one particular form rather than another. There’s pure expectation theory, liquidity preference theory and market segmentation theory. Readers who wish to learn more can have a look at the very dry material on Wikipedia³ or, for a more entertaining read, go to the old Market Commentary from October 2017, in which our Chief Economist Yves Longchamp⁴ looks at the various different approaches to the yield curve.

Regular readers of our Market Commentaries will already know that, due to current events, we will once again address the very flat U.S. yield curve. On 27 August 2018, the regional Federal Reserve Bank of San Francisco published a new study about the power of the U.S. yield curve to predict future economic development⁵.

The above graph shows the interest rate differential between 10- and 2-year U.S. sovereign bonds as well as the timing of the last three recessions, as published by the National Bureau of Economic Research⁶. It seems that approximately 18 to 24 months after a yield curve inversion – that is, when the long-term interest rate was lower than the short-term interest rate – the U.S. economy slid into recession. “There you have it!”, is no doubt the response from the statisticians among you. Or it could be a spurious correlation, that is, a purely coincidental relationship, not a causal one. One example of this is the quasi-serious study which found that the stork does deliver babies after all⁷; there’s also another collection of amusing spurious correlations⁸.

Joking aside, readers can rest assured that there are a great many very credible studies that try to explain the form of the curve. However, there are many researchers who claim that there is a causal relationship between the distinct flattening of the curve and the U.S. central bank’s quantitative easing. Ultimately, the central bank did greatly distort the market with its bond buying and thus brought about much lower yields, especially at the long end of the yield curve. The authors of the study from the regional Fed in San Francisco, however, conclude that those in the “this time is different” camp lack demonstrable statistical significance for their theory. Consequently, one would then have to assume that although U.S. growth is still regarded as highly robust, there is a considerably higher risk of a future recession in the event of a sustained flattening of the U.S. yield curve. If one still believes, as the author does, that the U.S. economy is very significant for global growth, then the relevance of this scenario for us Europeans as well becomes abundantly clear.

Figure 4: Steepness of the yield curves in the U.S. and Germany

The U.S. central bank in New York has also developed a model which it uses to calculate, based on many variables including the form of the yield curve, the probability of the domestic economy slipping into recession. The probability has climbed to 13.6% for July 2019 (see Figure 2). This value is not particularly high plus, in the end, it’s just another model. However, the dynamics of development are striking.

It is clear from Figure 3 how closely linked the U.S. and European financial markets are. Yields have moved in step for long periods of time over the past 30 years; only in the past couple of years have we seen a certain degree of decoupling between the two markets. Blaming this solely on the ECB’s ongoing quantitative easing is without a doubt somewhat too narrow a view. We believe that the continuing uncertainty about the stability of the euro also has a huge impact on the very low Bund yields. Even after the termination of the ECB’s asset purchase programme (APP), expected at the end of this year, it is possible that long-dated Bund yields will remain low. In fact, the inflation outlook would justify this eventuality. This would be a disaster for German pension schemes, but even more so elsewhere.

Lastly, we want to take a look at the different slopes of the yield curves on opposite sides of the Atlantic (see Figure 4). The U.S. curve is very flat but the German curve is not as flat as one might expect considering how low the long-term yields are. The fact is that, at 100 basis points, the German curve is at a happy medium in terms of the interest rate differential between 2- and 10-year sovereign bonds. This is mainly due to the harsh fact that the yields on 2-year sovereign bonds are -0.6%. Figure 5 shows the difference between these two degrees of steepness. As is plain to see, the box trade has almost hit a 15-year high. Courageous arbitragers could use this circumstance to enter a Bund flattener against a Treasury steepener. Market momentum argues against this trade but fortune favours the brave!

But let’s go back to the fact that the Bund curve is relatively steep. Why is this relevant? At present, many market players expect the ECB to raise interest rates no earlier than summer 2019, or at least this was what could be read into the statements made by Central Bank Council members. If the U.S. yield curve turns out to be predictive of the probability of a U.S. recession, then we could possibly see the first clear signs of darkening clouds on the economic horizon in summer 2019: at the exact same time as the ECB’s potential first rate hike in more than 10 years. However, we assume that under such circumstances the ECB would not raise interest rates. Therefore, there is a real possibility, with a probability greater than zero, that we will head into a European recession with negative central bank interest rates. Not a nice prospect but, luckily, not really very likely in our view.

However, we would not warrant the trust our investors place in us if we ignored the unpleasant possibilities. Once again, to make it perfectly clear: we do not expect a U.S. recession to set in in the next 12 months. Growth is very robust and even seems to be gathering momentum in the third quarter. Globally, however, growth seems to have passed the peak. It remains solid but rates are slowing. As one would say in calculus, the first derivative is positive but the second derivative is already negative.

² Also known as the term structure of interest rates.

America’s economy and trade cycle is well ahead of Europe’s. Our Chief Economist Yves Longchamp goes into the macroeconomic opportunities and risks.

If you are having video playback issues, please click HERE.

Positioning of the Ethna Funds

2018 has been all about populism and the financial markets fell very much under its influence in August as well. For example, the new Italian government and its election pledges are causing concern among investors and politicians in the present financial situation; there is a crisis in Turkey, partly as a result of the open confrontation between Erdogan and Trump; the U.S. President is also keeping up his aggressive stance in relation to international trade; then, in consequence, we have the developments in growth in China, which if nothing else are impacting all emerging markets. We mustn’t forget Russia and North Korea either.

August again clearly demonstrated that not only is the time of synchronised economic growth over for now but so, too, is the time of synchronised market fluctuations. While in the U.S. equity indices – on the back of an extraordinarily good reporting season and virtually unaffected by the crises in the rest of the world – climbed to new all-time highs, the prices in Europe and, above all, in emerging markets again went into correction mode over the course of August. In addition to the escalating trade conflict between the U.S. and the People’s Republic of China, the markets were shaken up by the crises in Turkey and Argentina, which culminated in a massive depreciation of the respective currencies. The ensuing market reaction – falling yields on safe-haven sovereign bonds and a stronger U.S. dollar – was a logical consequence in this risk-off environment. The risk of a strengthening U.S. dollar having a critical effect on the solvency of some emerging markets has not gone away, but is not as immediate, not least due to a return to the levels seen at the beginning of August. These developments had only a moderate effect on long-term interest rates in the U.S. and Europe. Recent confidence did bring about a slight rise in yields; however, at approximately 33 basis points for 10-year Bunds and 2.86 % for their U.S. equivalents, interest rates are still low. The situation in Italy, on the other hand, remains tense. Here, yields at the long end have recently risen to 3.2 %.

Why go down the easy route when there’s a hard one? We must ask ourselves this question in light of the high weighting of European equities in the Ethna-DYNAMISCH. Almost all European equity markets closed the month down, while their U.S. counterparts were up. Although our European securities did also make a positive contribution to the overall result thanks to active stock selection, the overall regional headwind is considerable and there is no sign of it dying down for any length of time. The conditions have been the same for quite some time now: due to greater political and economic uncertainties as well as weaker growth, valuations in Europe are much lower than in the U.S. However, for the premium one pays, U.S. companies are offering more attractive fundamentals. Looking at developments in recent weeks, the list of potential risks is not getting any shorter and, more importantly, 9 times out of 10 the potential impacts will hit Europe harder than the U.S. Within the Ethna-DYNAMISCH, therefore, we made the following portfolio adjustments in August:

Looking ahead, the risks and opportunities for the equity markets are balanced. With our active allocation, the value-oriented selection approach and the intelligent hedging components, the Ethna-DYNAMISCH remains well-positioned to deal with the uncertain market environment. At the same time, the portfolio’s asymmetry means it has every opportunity to participate in rising equity markets and individual investment ideas. 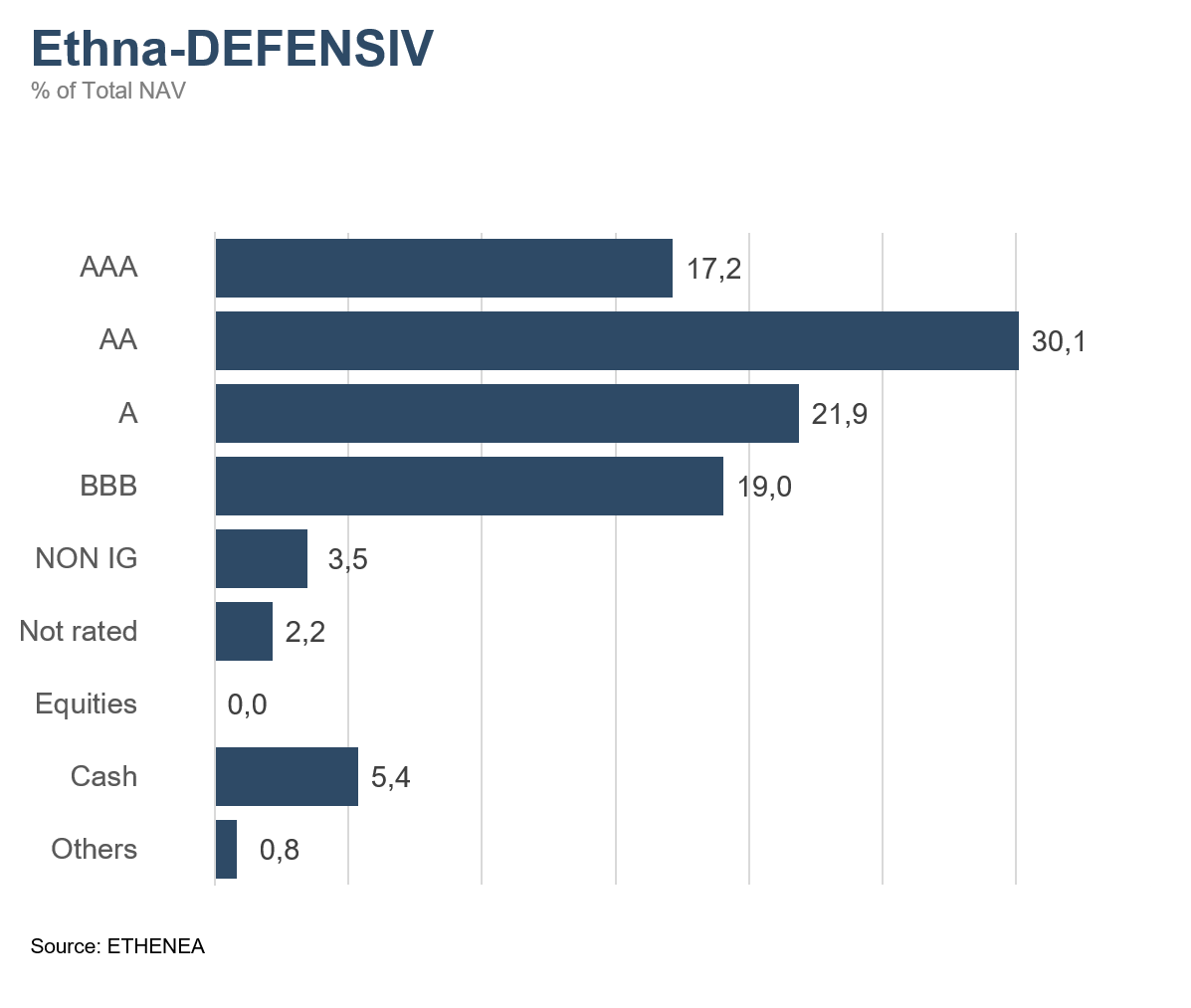 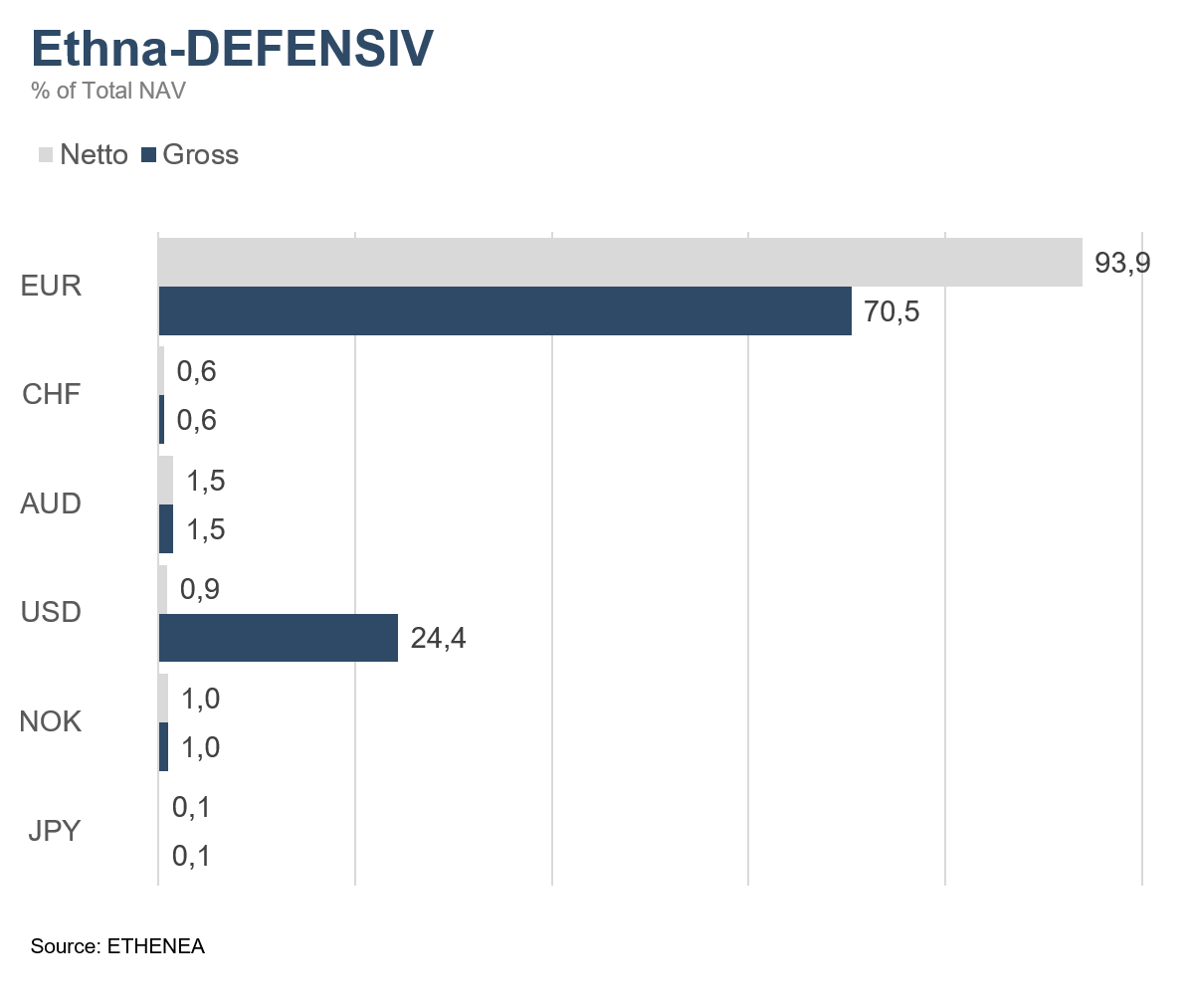 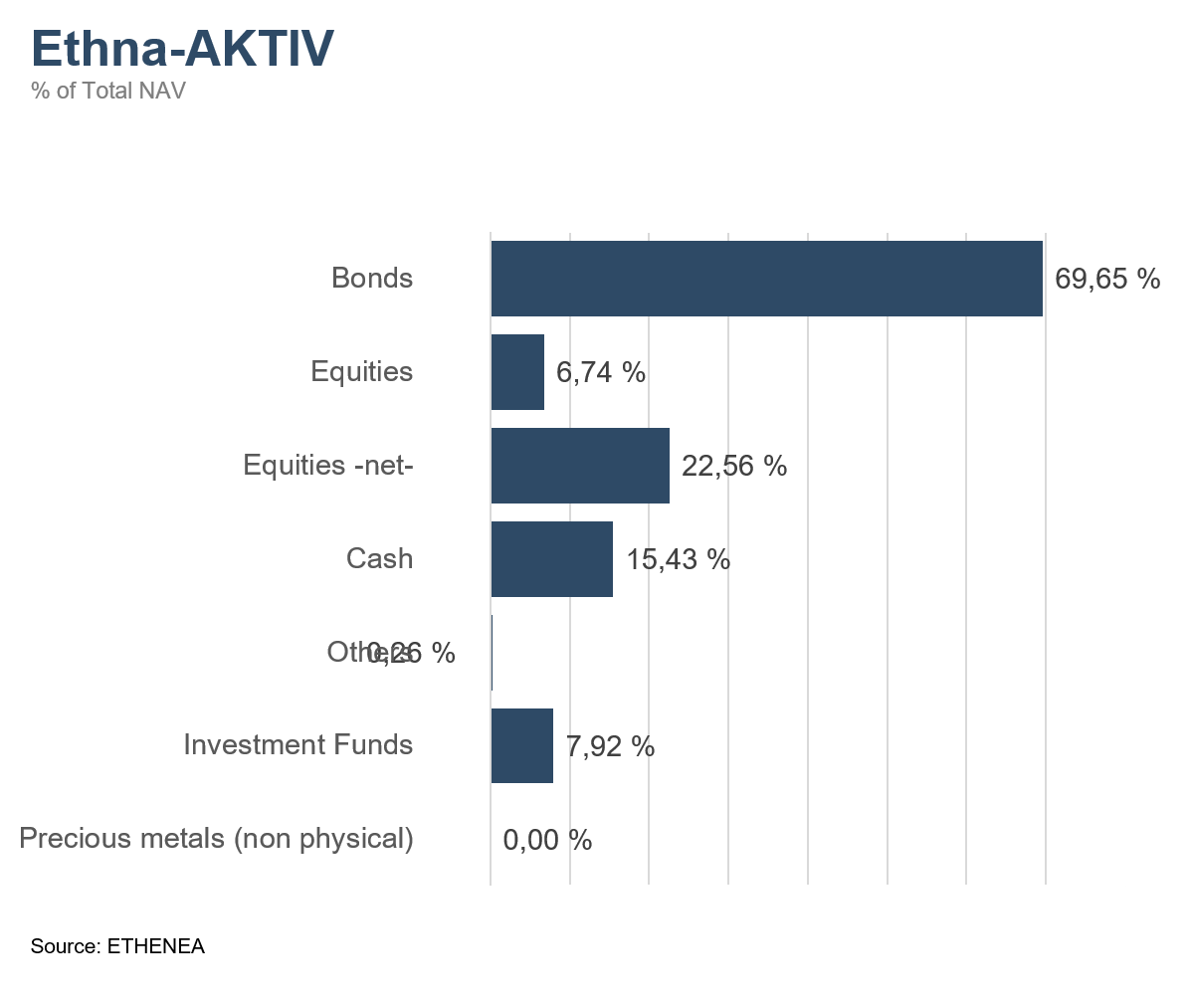 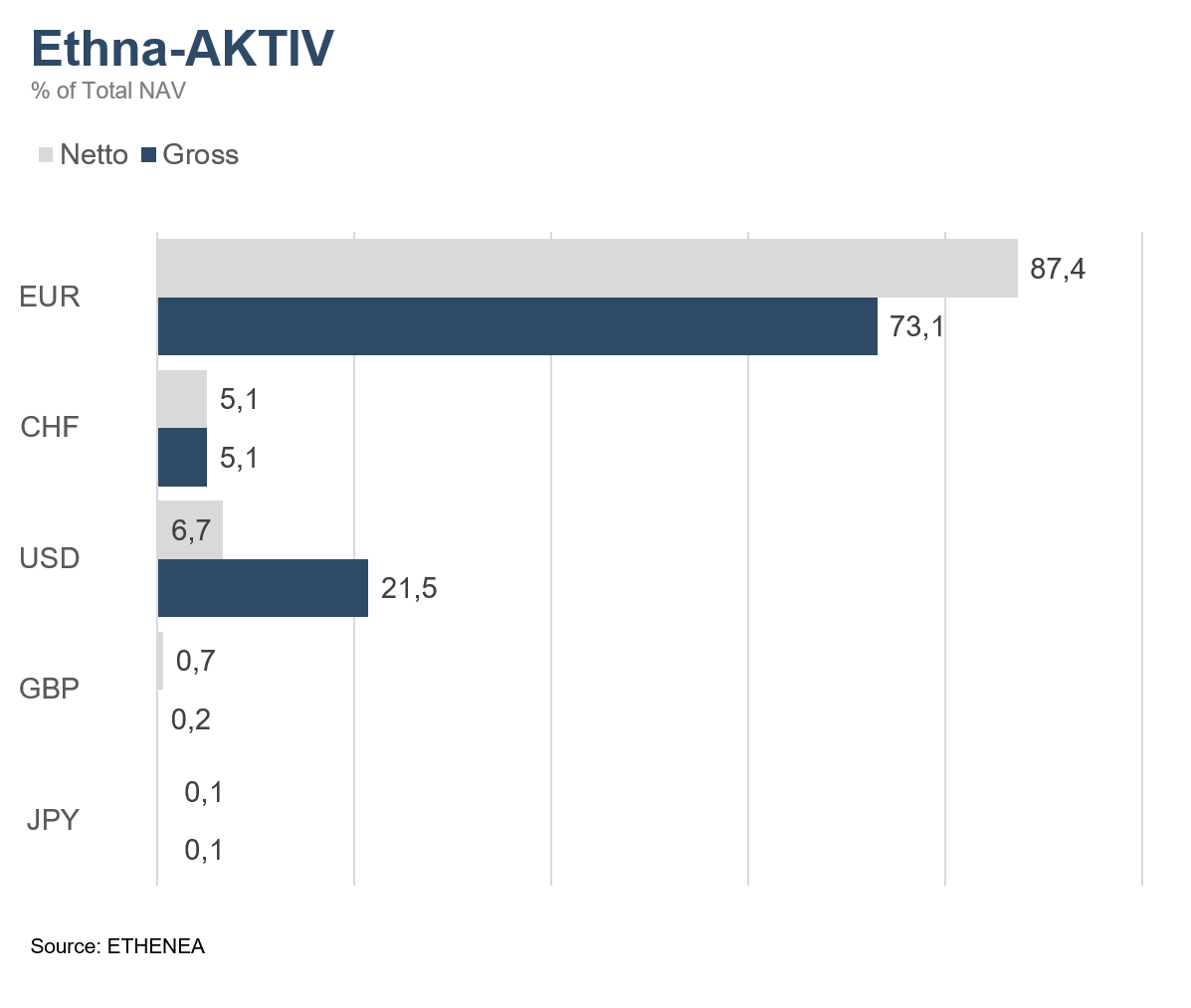 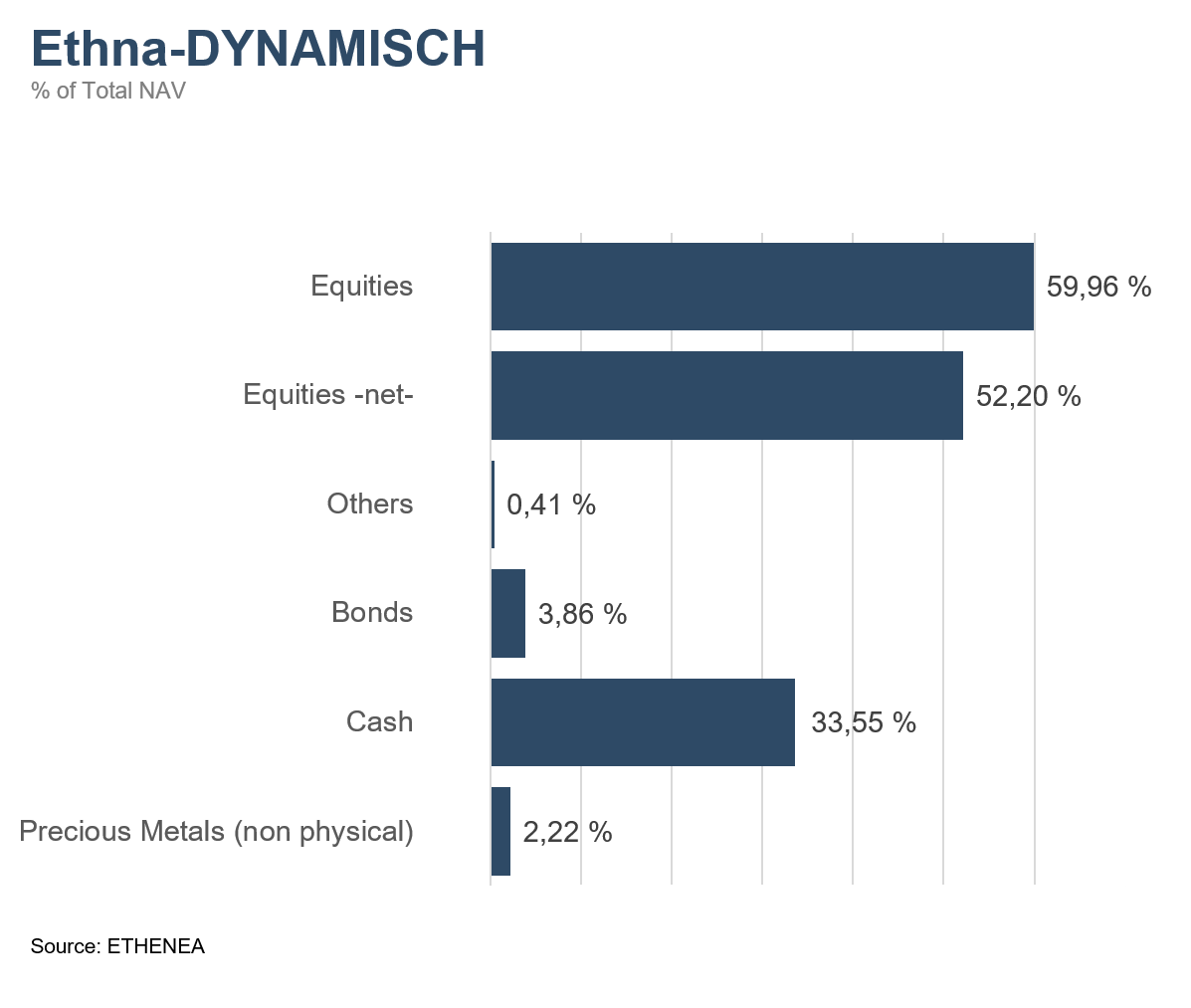 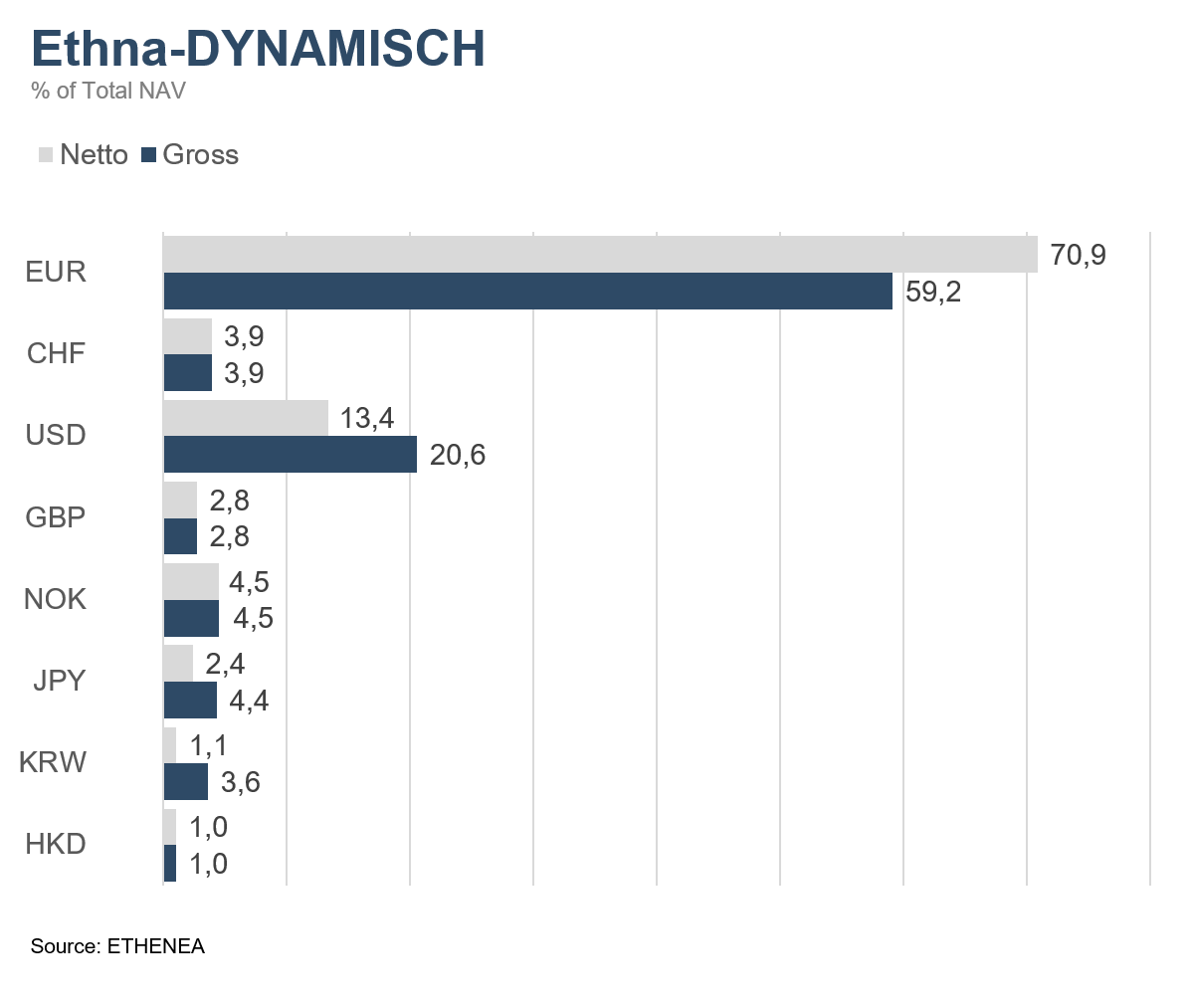 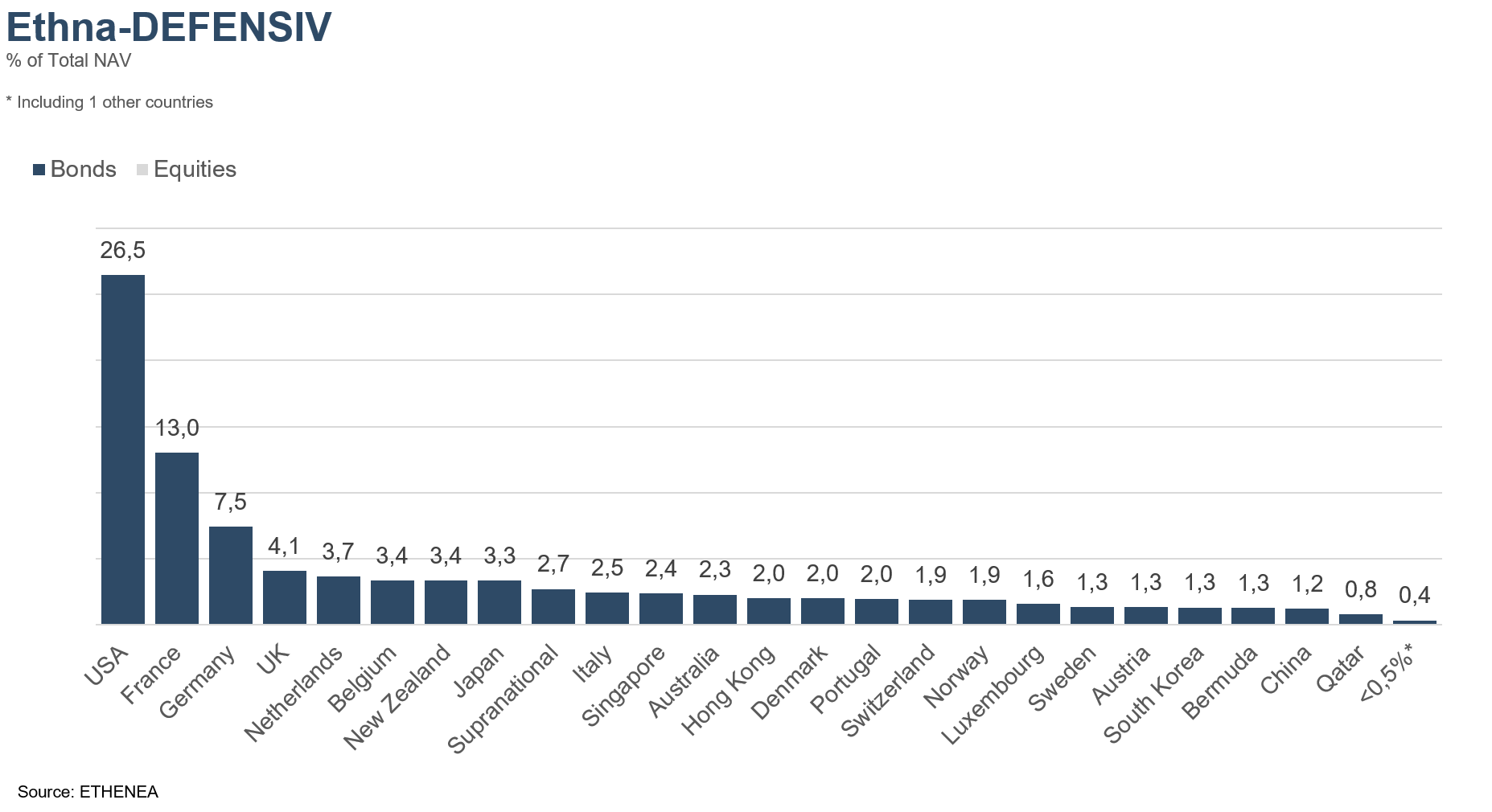 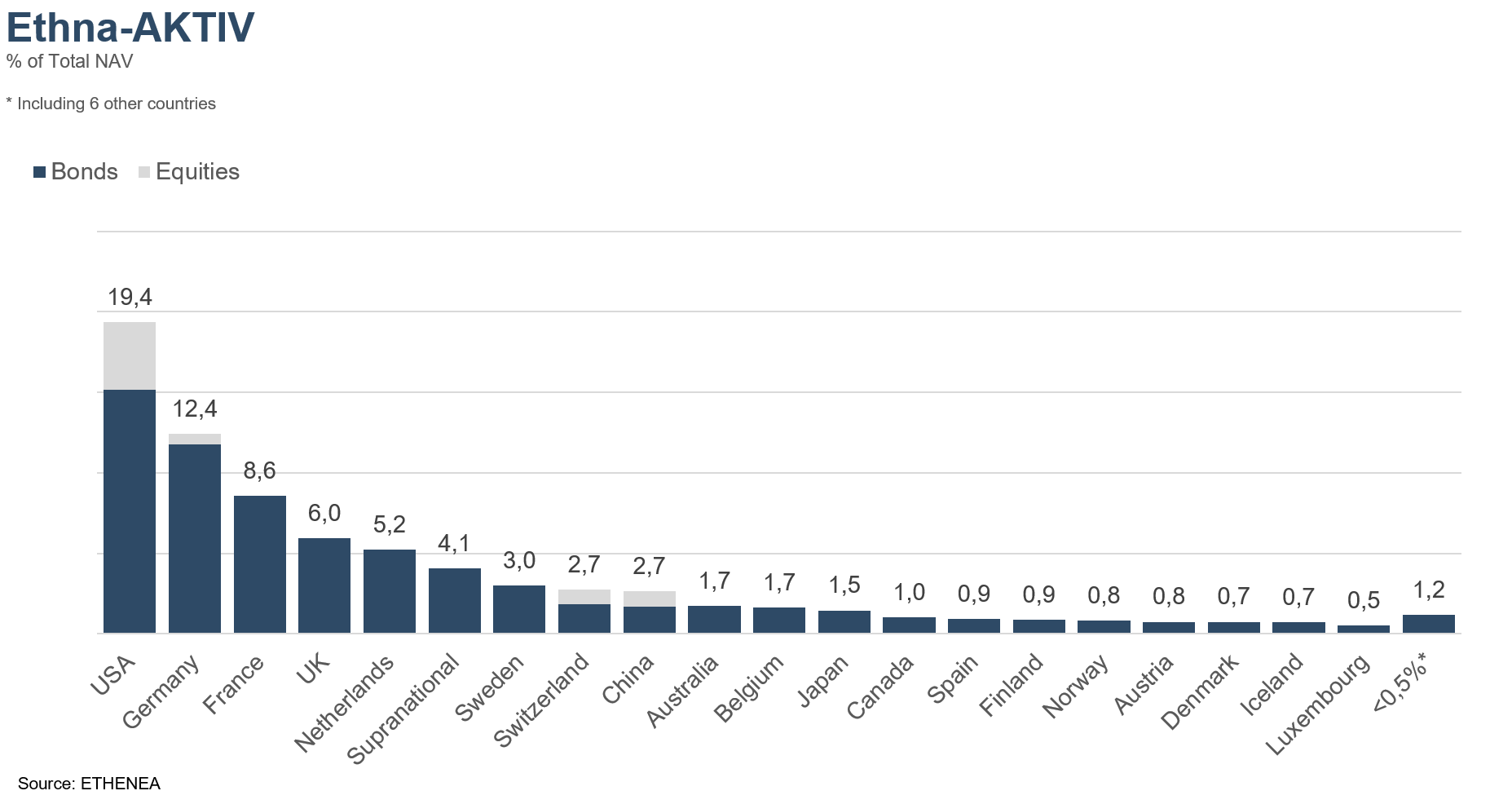 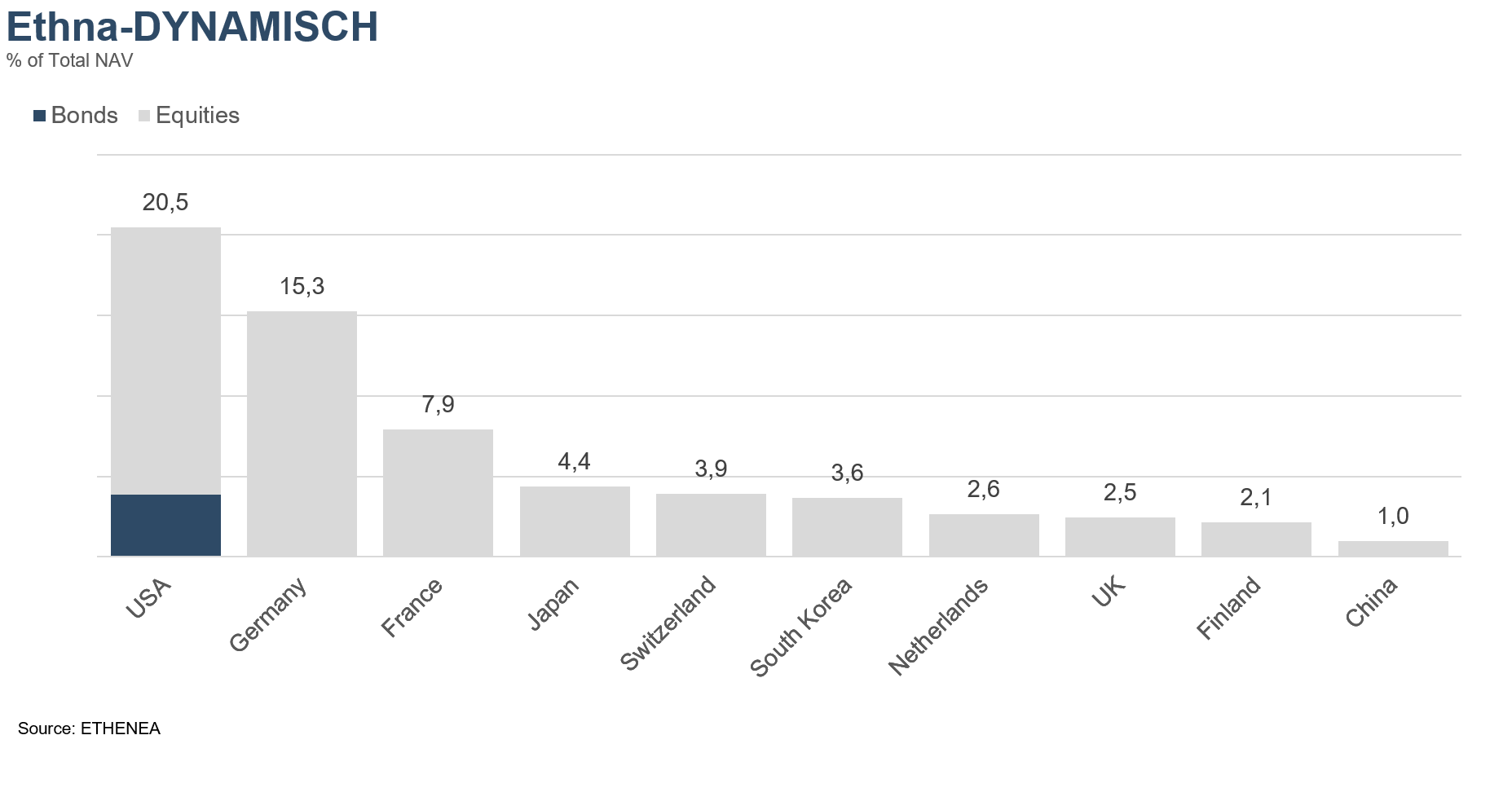 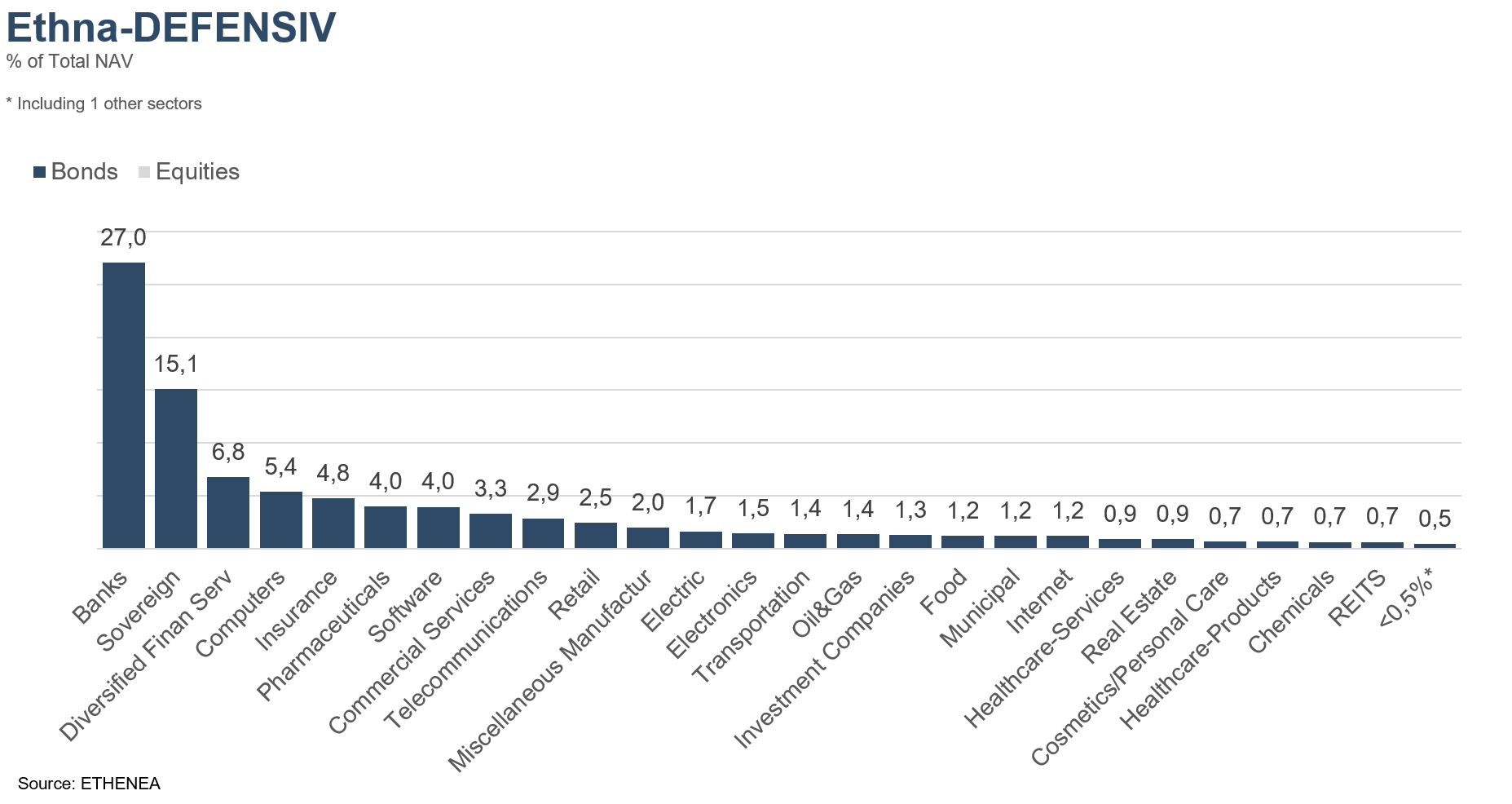 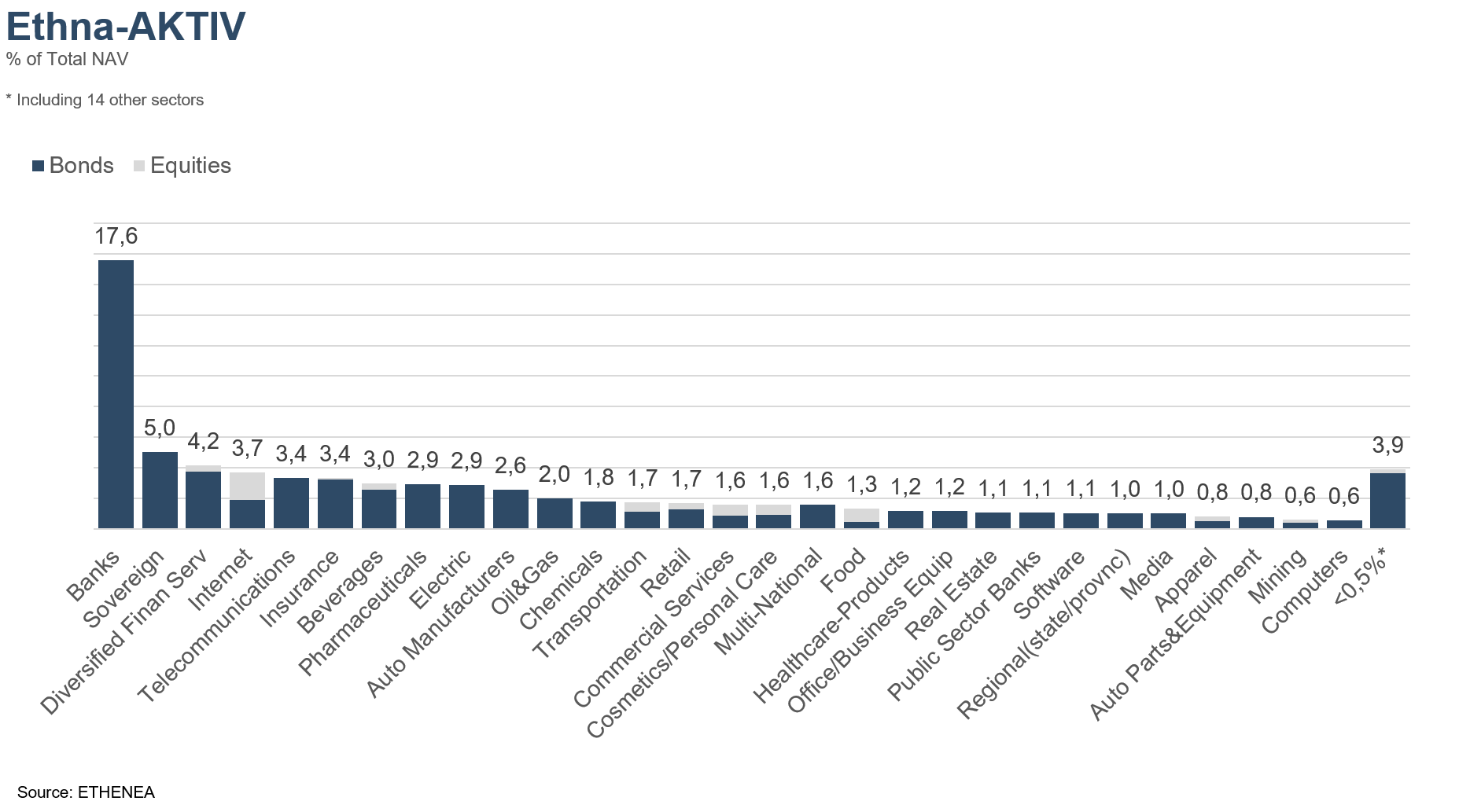 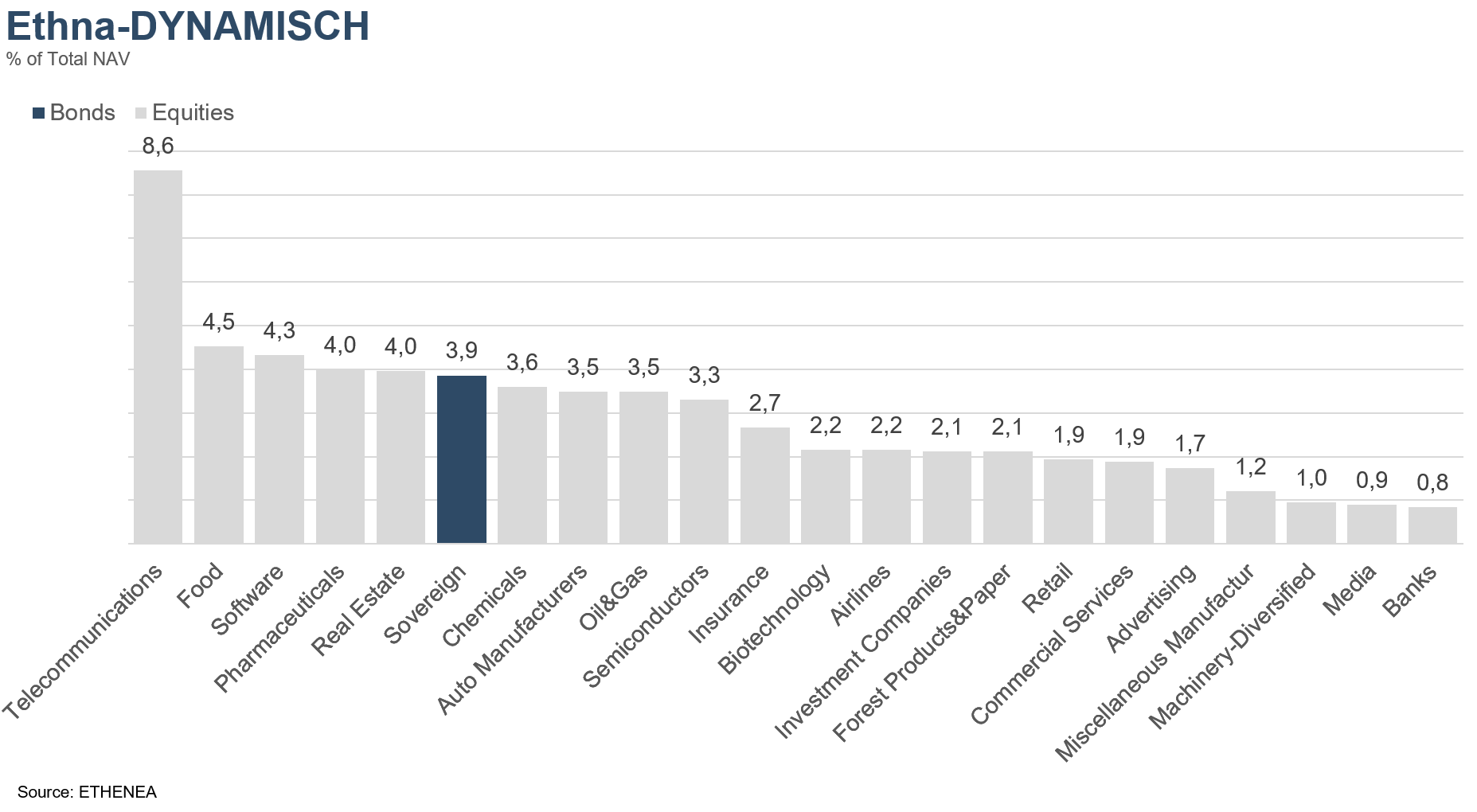