Our story so far…

A decade of ETHENEA. To celebrate this milestone, we would like to share some of our history with you.

Although ETHENEA is celebrating its 10th anniversary, it is important to remember that the company is part of a bigger story that actually began around 18 years ago. 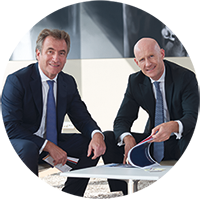 It was then, in 2002, after years of honing their skills working for well-known players in the finance industry, Luca Pesarini and Arnoldo Valsangiacomo decided to establish their own fund, the Ethna-AKTIV – a risk-conscious, multi-asset fund with a focus on asset allocation.

Over time, the fund and its underlying philosophy became so successful, that increasingly more investors became aware of the Ethna-AKTIV and invested in it. Due to this increase in popularity, Luca Pesarini and Arnoldo Valsangiacomo decided to follow their passion and set up two additional funds.

With the Ethna Funds family now consisting of three funds, and assets under management steadily increasing thanks to the success of their management approach, in September 2010, they decided to set up ETHENEA Independent Investors S.A. - a dedicated asset management company focused solely on managing the funds and supporting investors.

Initially, ETHENEA was a small company with around a dozen people in areas ranging from portfolio management and execution through to fund operations, data and risk management. Yet everyone at the company had one thing in common – they were passionate about the Ethna Funds, the finance industry, and supporting the investors who had placed their trust in them.

Over the next few years, we built on our success and ETHENEA grew steadily.

In 2011, we opened a Swiss subsidiary. We also strengthened our support for clients in a range of markets.

We are proud of our history, but we are not content to simply rest on our laurels. We know the world is constantly changing and we need to adapt in order to meet the challenges of the future head-on. So, in the past we have optimised the company strategy, as well as that of the Ethna Funds.

One example of this is the establishment of FENTHUM, which consolidated the business development services and marketing support for the Ethna Funds, and those of our sister company MAINFIRST, into one company.

Over time, the Ethna-AKTIV has evolved into a highly flexible multi-asset fund that focuses on risk-conscious asset allocation, while the Ethna-DYNAMISCH has refined its equity-oriented strategy enabling the fund to have an equity exposure of up to 100%.

Despite these changes, we have remained true to ourselves and to our investors. As in our early days, we continue to manage and safeguard the funds entrusted to us in the best interest of our investors. For the last decade, we have been a trusted asset management partner for our investors and we will continue to support them to achieve their investment goals in the years to come.

Unfortunately, this content is not accessible to private investors.