...in for a pound! Or perhaps not? Is there an exit from Brexit? The European Court of Justice is currently deliberating on whether it is possible to revoke the triggering of Article 50 and, if so, how? With negotiations on the EU side at an end and the withdrawal deal having been endorsed by the remaining 27 member states at the most recent EU summit, Theresa May has a problem. The deal still has to be approved by the British Parliament and, at the time of writing, it is looking increasingly likely that May’s government will not get it passed. Criticism of the deal is just too strong, as it would tie the UK to the EU for too long, with the UK having no say. Even the Chancellor expressed the opinion that the UK would be better off staying in the EU. However, the ECJ has to clarify whether staying is a possibility at all. If Parliament rejects the deal and if the ECJ rules against revocation, a hard Brexit would ensue, with catastrophic consequences not just for the UK but for the whole of the EU¹.

However, it remains to be seen whether things will turn out as bad as the study just published by the UK’s central bank, the Bank of England, predicts. In the worst-case scenario of a disorderly, no deal Brexit, the BoE expects Britain’s GDP to contract by as much as 8 % in the first year. House prices are forecast to decline 30 %, commercial property prices would fall almost 50 % and the value of the pound sterling would drop 25 %. On top of that, consumer prices are predicted to soar and inflation would rise to 6.5 %. One can only hope that things don’t turn out that way (or even come close). If the ECJ rules that revocation is possible, the hope is that a second referendum will be held and 29 March 2019 will simply be a day like any other. Then, apart from it having been a waste of time and effort, we could dismiss the last two years as nothing but a bad dream.

Figure 4: Year-on-year change in house prices in London and UK

However, it looks like the capital market is not taking the possibility of an exit from Brexit seriously. While the cost of insuring exposure to debt is rising (see Figure 1), it is still low, with 35 bps corresponding to a probability of default of just 3 %. In comparison, Italy’s CDS is 250 bps, meaning a probability of default of 20 %. The market appears to be having rather more problems with longer-term inflation. The difference between the yields on current 30-year and 10-year UK sovereign bonds (Gilts) (see Figure 2) rose sharply after Theresa May returned to Westminster with her deal. It seems hardly anyone believes that the deal will be approved by Parliament. The pound sterling, on the other hand, remains stable (see Figure 3). While property prices in general appear to be slipping, only in London are we seeing an actual slump in house prices (see Figure 4). However, after years of double-digit price rises, perhaps it is time for a cooling off in the London house market without the need to panic.

In any case, the next few days and weeks will be interesting. Should another referendum come about, one can only hope the Brits show enough common sense and keep calm. I, for one, would welcome back the UK.

Figure 5: Chart of prices of WTI crude oil and one industrial metals index

Figure 6: Supply of and demand for crude oil according to the projections of the US agency Energy Information Administratio

We turn now to crude oil, in a follow-up to last month’s market commentary Fin de Siècle. Even though Donald Trump² tweeted that falling oil prices were good for the economy, and even credited himself with them, falling oil prices are often a sign of a flagging economy. Figure 5 shows the trend in the prices of WTI crude oil and one industrial metals index. One can see that although the latest fall in the price of oil (-35 %) is extremely sharp, industrial metals are also well back, down 22 %. This would point more towards a fall-off in demand and would support the theory we put forward in last month’s market commentary: that we are at the beginning of a slowdown in the global economy. The US Energy Information Administration also projected a decline in demand for crude oil for 2019 (see Figure 6). Perhaps they should let their own president know their projections.

In light of this, Fed Chair Powell’s comments that federal funds rates were very close to the vicinity of neutral take on a different meaning. Inflation expectations are falling, and thus possibly also the need for the Fed to make one or two rate hikes. On this side of the Atlantic, one would hope that the European Central Bank realises the window for rate rises in the eurozone could close soon. The capital market, on the other hand, is not expecting any rate rises before the end of 2019. We fear the market might be right.

In this environment, bonds could once again deliver positive returns. The yields on 10-year US Treasuries again appear attractive, at over 3 %. One has to keep a very close watch on the market to determine whether the economic downtrend will continue and potentially intensify, or whether it will turn out to be no more than a dip in growth. If a disorderly Brexit transpires – and, given the stakeholders, this possibility cannot be ruled out even with the best will in the world – then growth in the eurozone will be impacted too. Fingers crossed!

¹ An Advocate General of the ECJ stated on 4 December 2018 that unilateral revocation of the notification to withdraw was possible in his opinion. The court will rule at a later date. See: https://www.tagesschau.de/ausland/brexit-eugh-103.html

Equity markets with potential: China and US

Michael Blümke, one of the Lead Portfolio Manager of the Ethna-AKTIV, explains the chosen approach for the fund given the current late phase of the equity market economic cycle.

If you are having video playback issues, please click HERE.

Positioning of the Ethna Funds

October 2018 has already been described more than once as a very bleak month. While November 2018 turned out to be more or less neutral for equity markets, it was much less benign for the credit markets. In the investment grade segment, the euro and US dollar spreads widened by 20 basis points. The non-investment grade spreads widened a good deal more, at 55 basis points. For some readers this may not seem like much, but assuming a maturity of 10 years, the increase would mean a fall of 1.5 % in the investment-grade valuation; in the non-investment grade segment it would mean a loss of more than 3 % off the valuation.

Last month featured some important events. Fed Chair Jerome Powell gave an important speech at the Economic Club of New York, and the G20 summit in Argentina was awaited with anticipation. It was easy to miss other news in the shadow of these two events. Other important developments included the Italian government’s willingness to make budget changes, as well as the military incident in the Kerch Strait involving Russia and Ukraine. The confrontation led President Trump to say during the summit that he would cancel his sit-down with President Putin. The summit itself did not yield any major decisions. The highly anticipated meeting between President Trump and his Chinese counterpart Xi brought about the desired hiatus in the customs dispute between these two economies for the time being. This gives us two very supportive events for the markets: a sort of ‘Powell put’ – though it may be too early to call it that – and progress in the trade dispute between the US and China.

We believe that a conservative portfolio positioning is ideal in this late phase of the cycle. In our opinion, a recession is not yet imminent. For every investment, we assess the risks and opportunities in-depth and only enter into positions when the risk/reward ratio is appropriate.

¹ This takes account of the temporary increase in the equity exposure prior to the G20 summit, which is not included in Figure 9 for accounting reasons.

The market storm described in last month’s market commentary has passed but there’s no sign of a stable high or completely clear skies yet. After the losses in October, November began strongly, especially for the US stock markets, and the indices made strong gains. As in the past, Europe unfortunately couldn’t compete and its performance was weaker but still positive. Towards the middle of the month the gains began to dissipate and the indices again swung around to the negative. Fed Chair Powell’s comments about US monetary policy were found to be dovish, and triggered a brief market rally in the US at the end of November. The US indices subsequently gained more than 2% in one day. The positive reaction from European stock markets to the strong figures from overseas was rather muted, resulting in them closing November in slightly negative territory, while US stock markets closed slightly up. In recent months we have talked about the deadlock in equity market signals and this situation is unchanged, i.e. according to our market analysis, the positive and negative signals are more or less balanced. Optimists say the glass is half full, while pessimists say the glass is half empty. However, we are trying to deal with this tricky market situation by having a balanced allocation. Accordingly, we have positioned our portfolio as follows:

Following the stock market correction, our analysis again shows more attractive valuations on the global markets. On the other hand, we have slow economic growth, which is hurting the cyclical sectors in particular. With this in mind, we will continue to successively reduce cyclical securities in the portfolio. On the whole, given its ongoing substantial equity allocation coupled with the hedging components and above-average cash holding, we believe the Ethna-DYNAMISCH is still well positioned in the current environment. 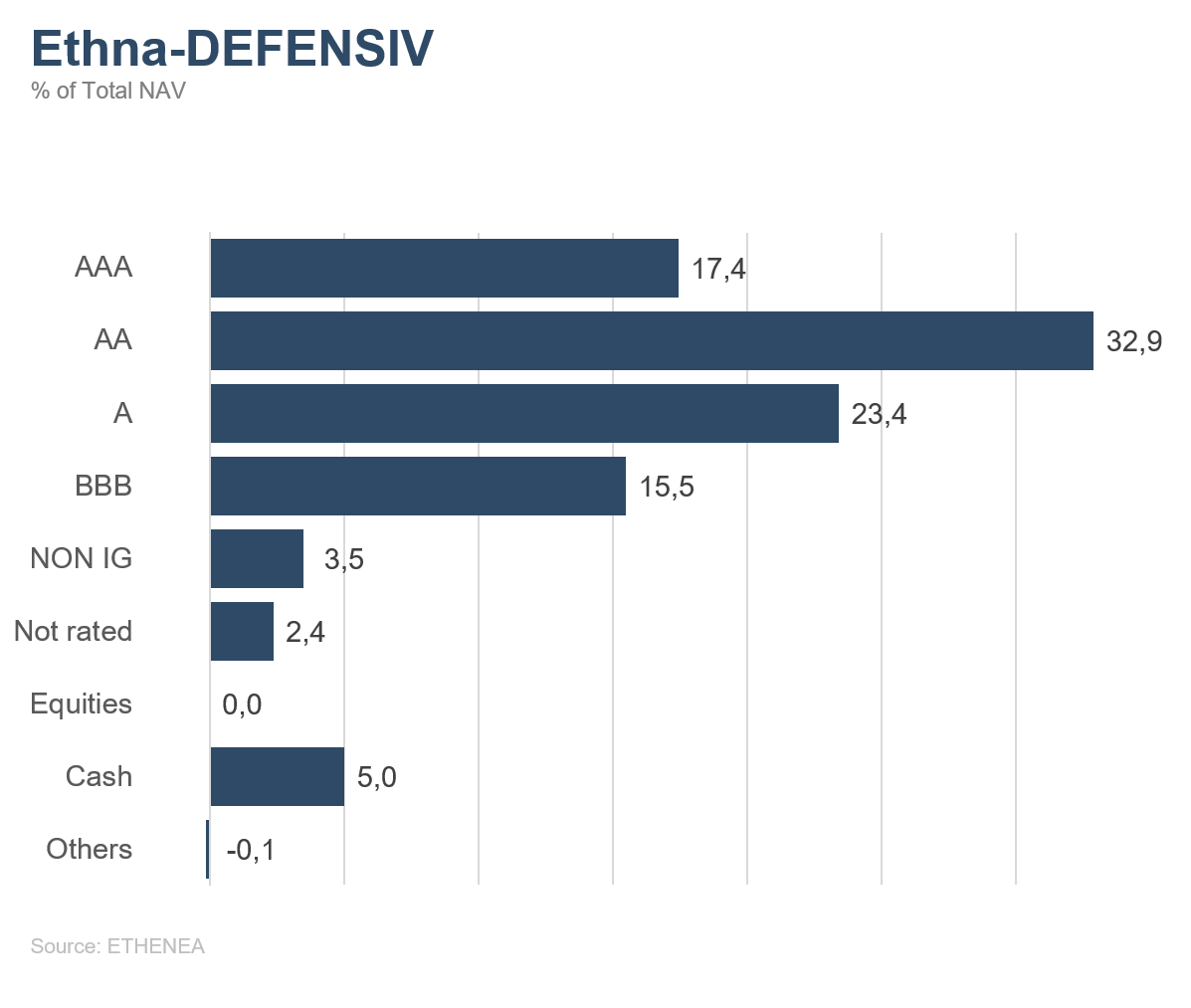 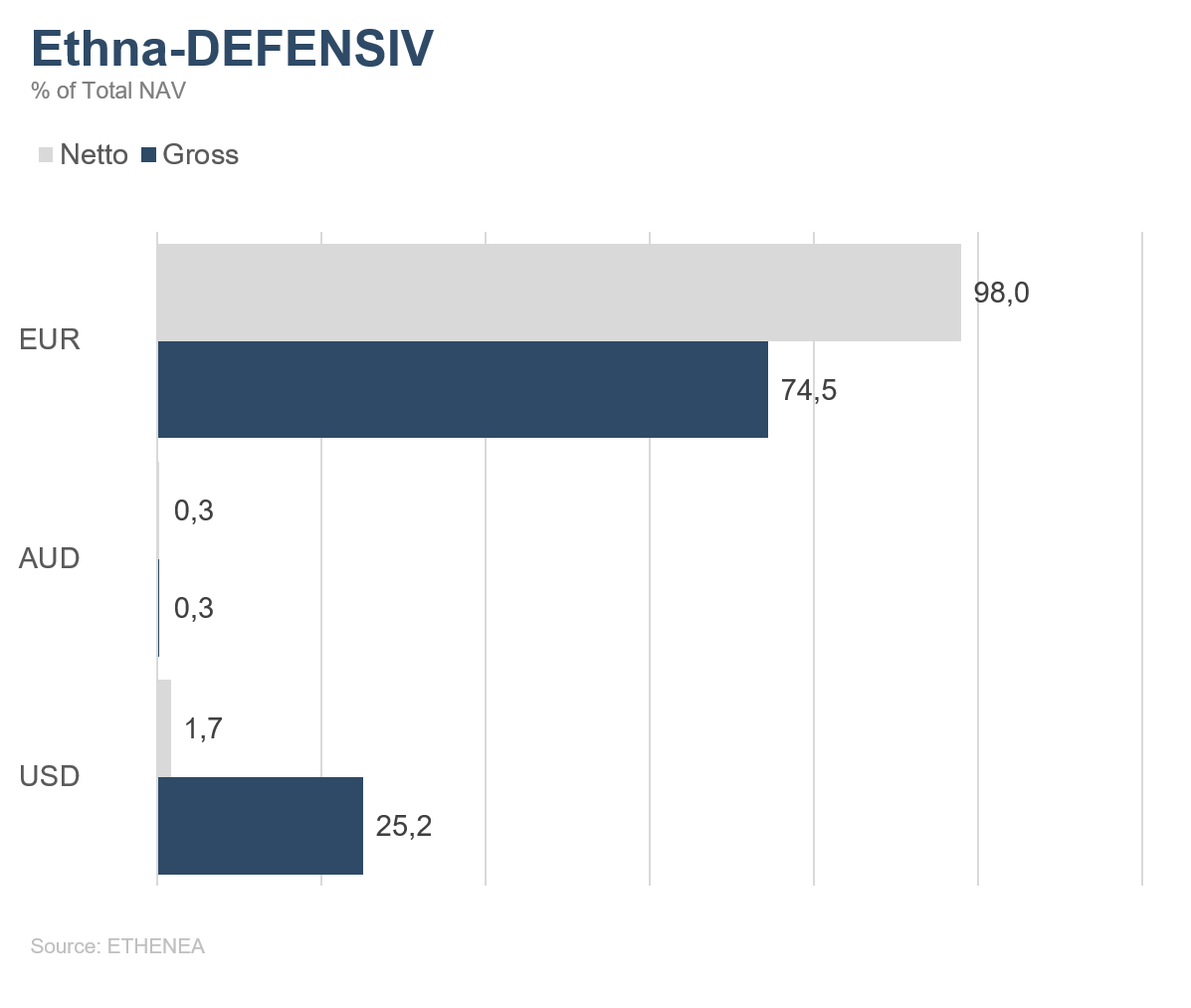 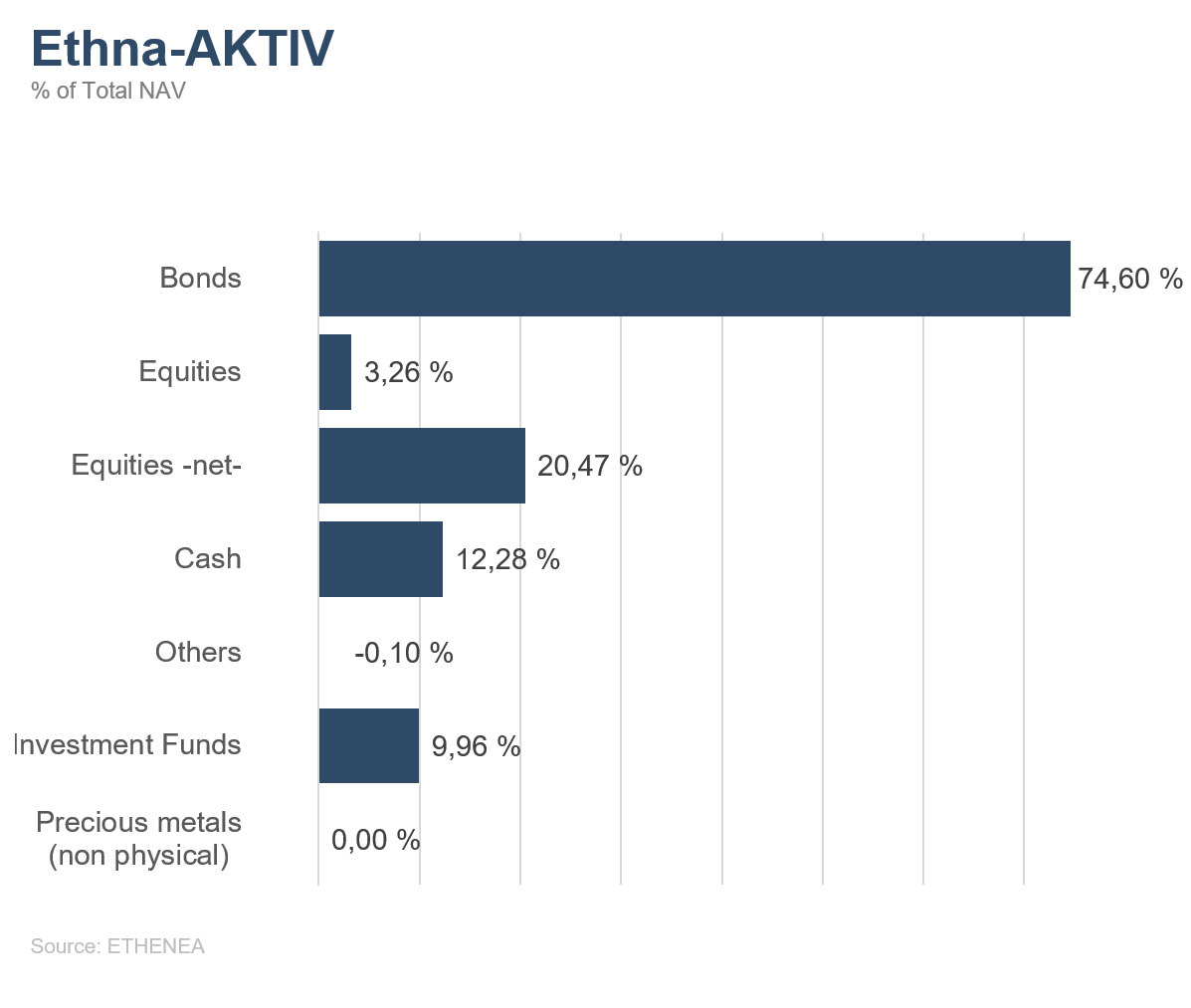 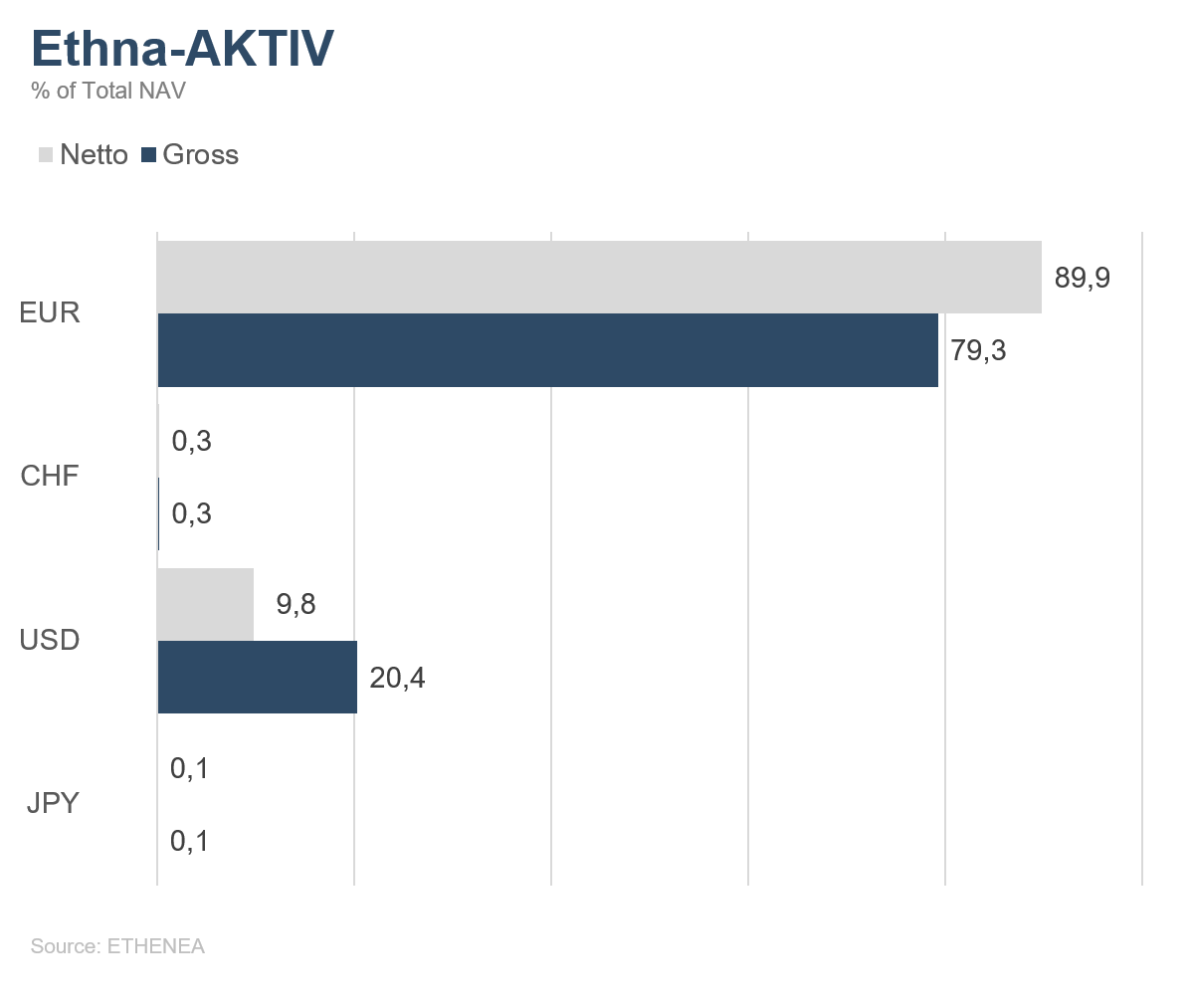 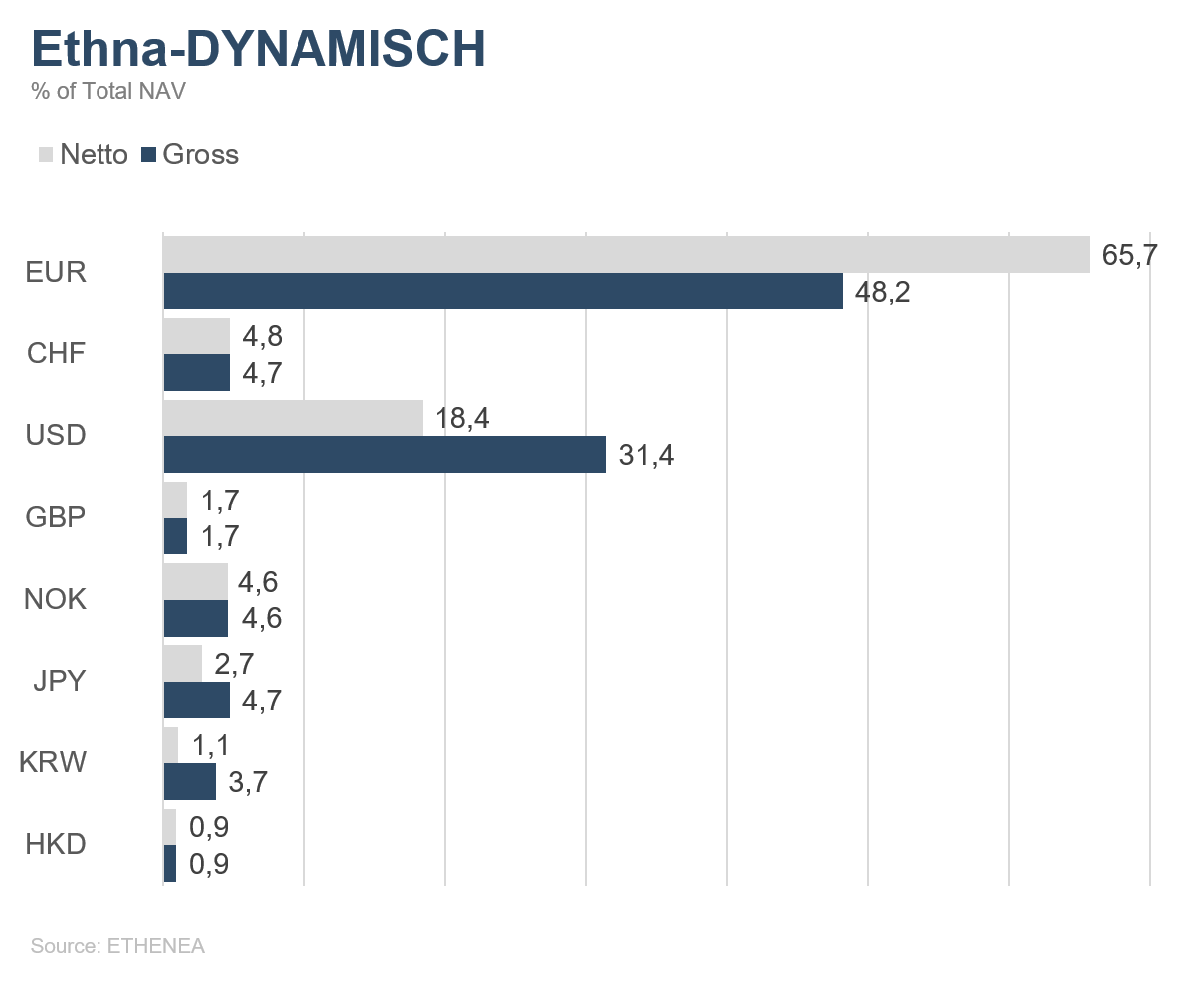 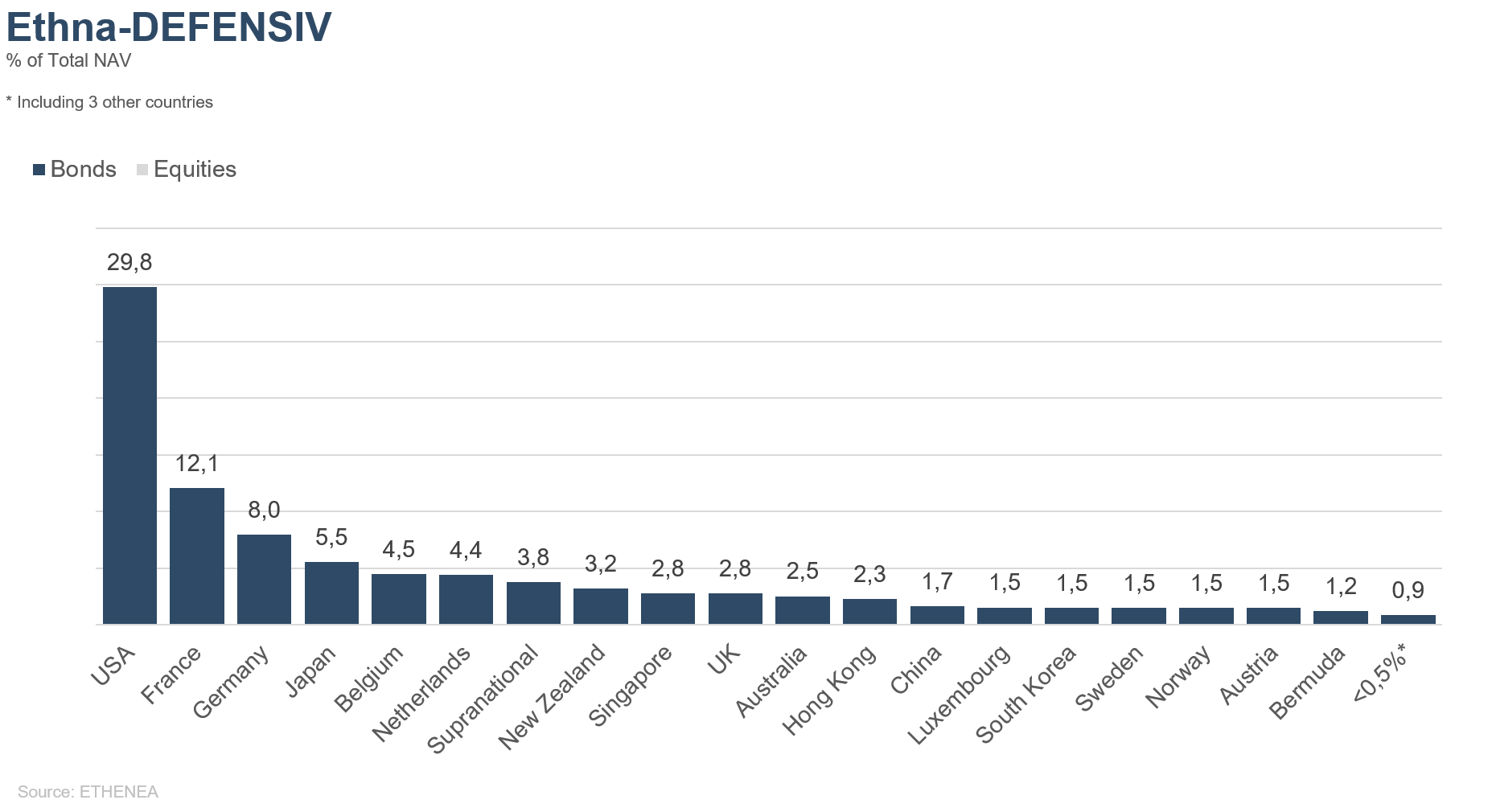 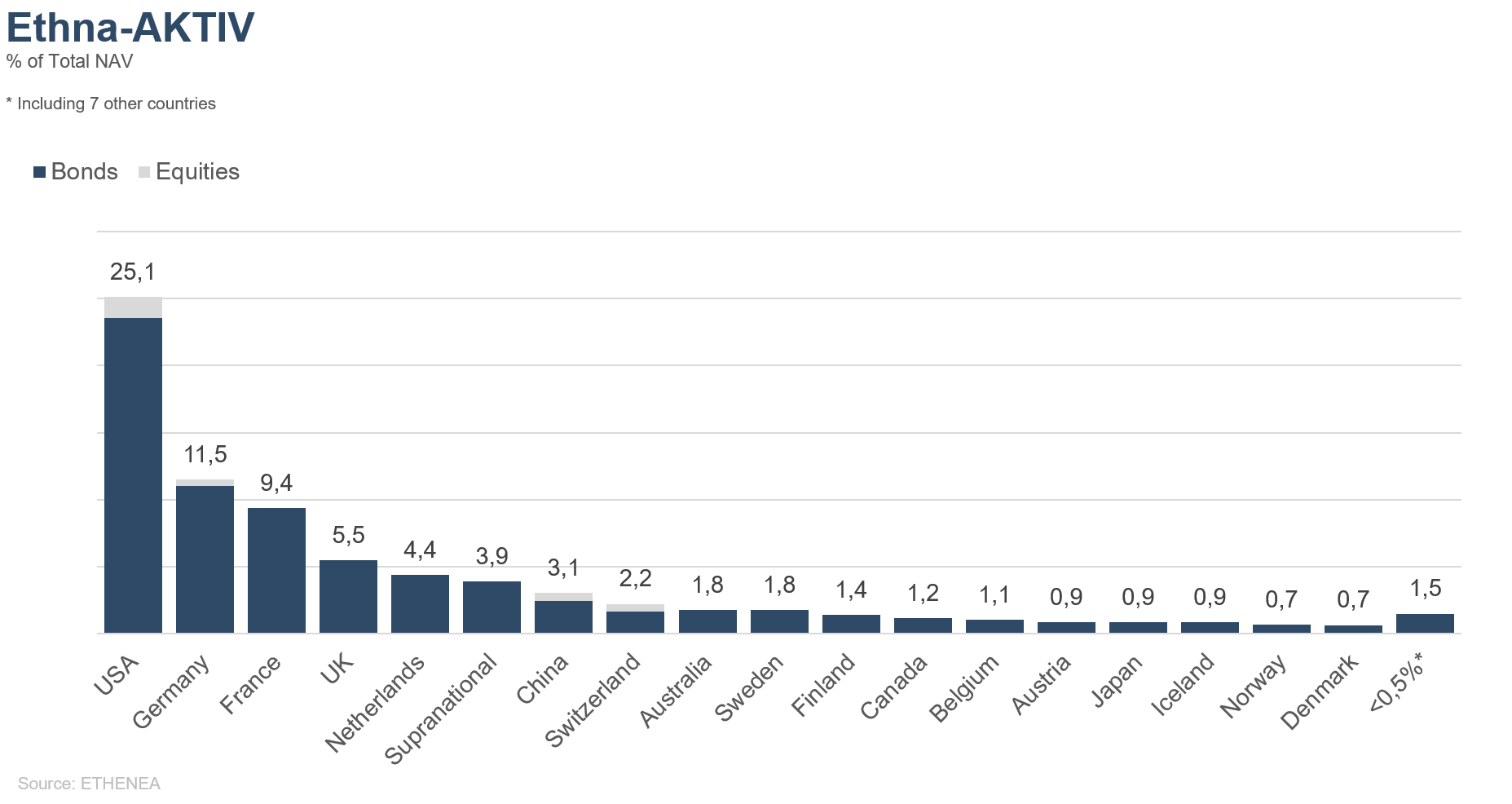 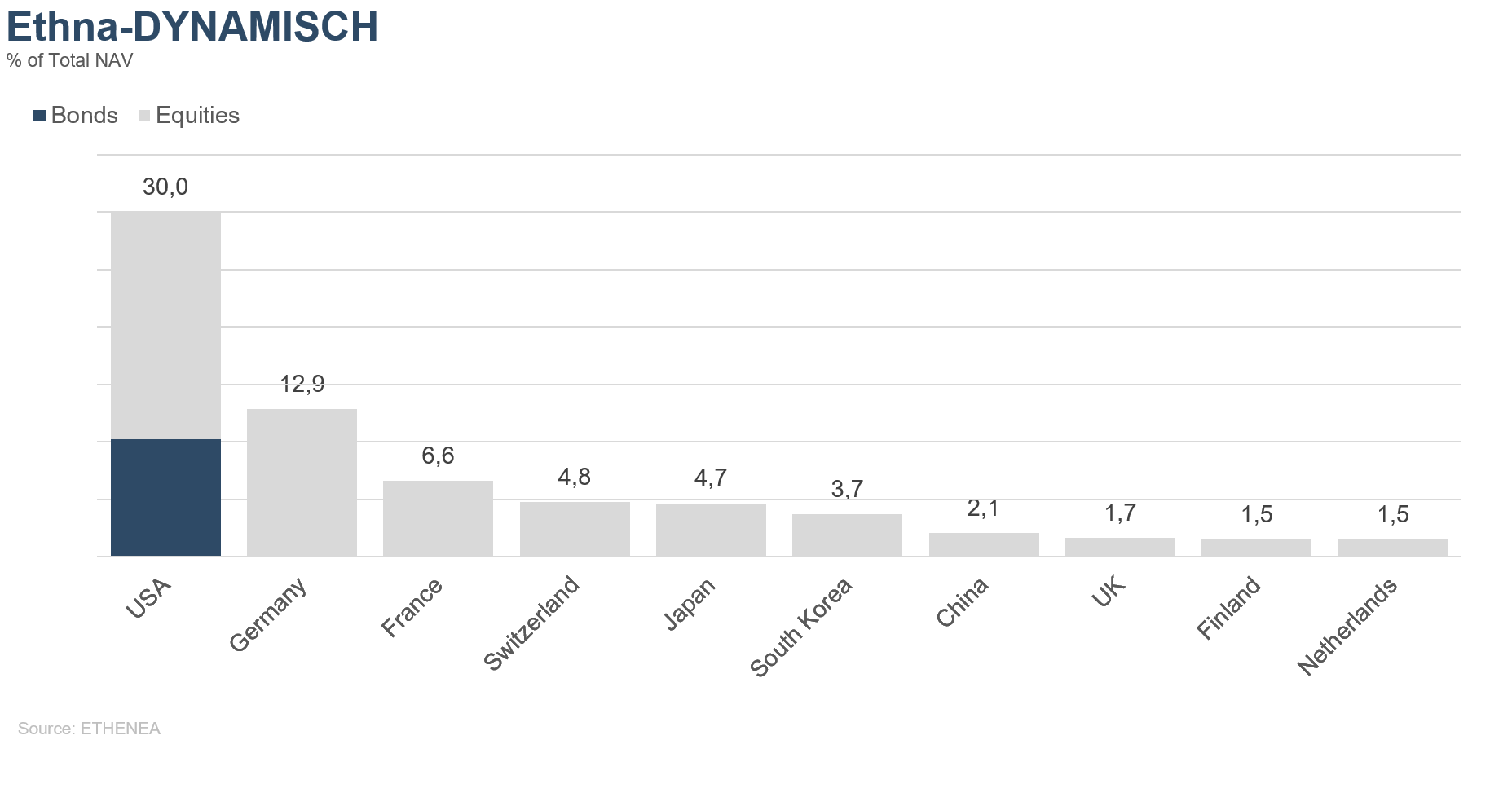 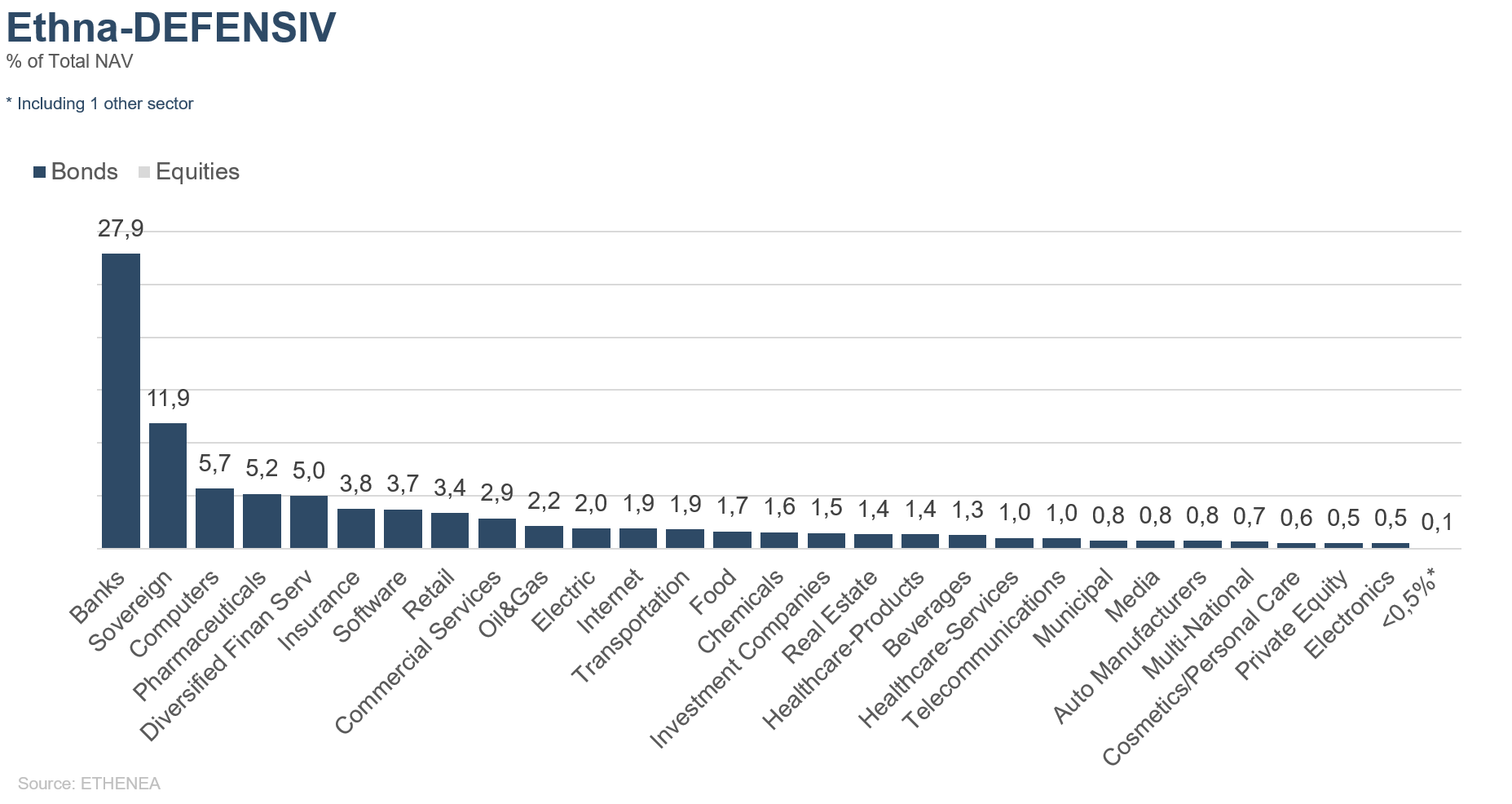 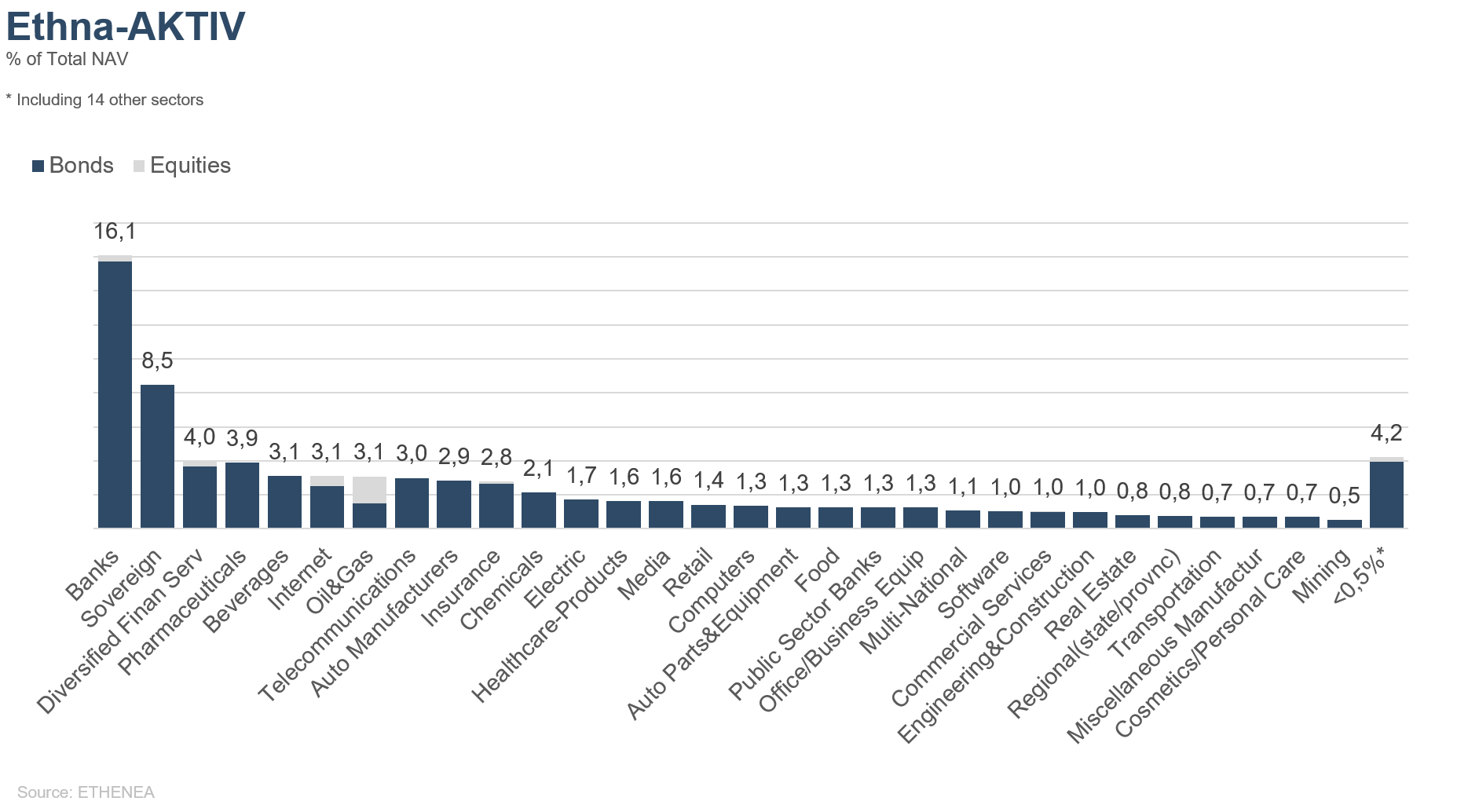 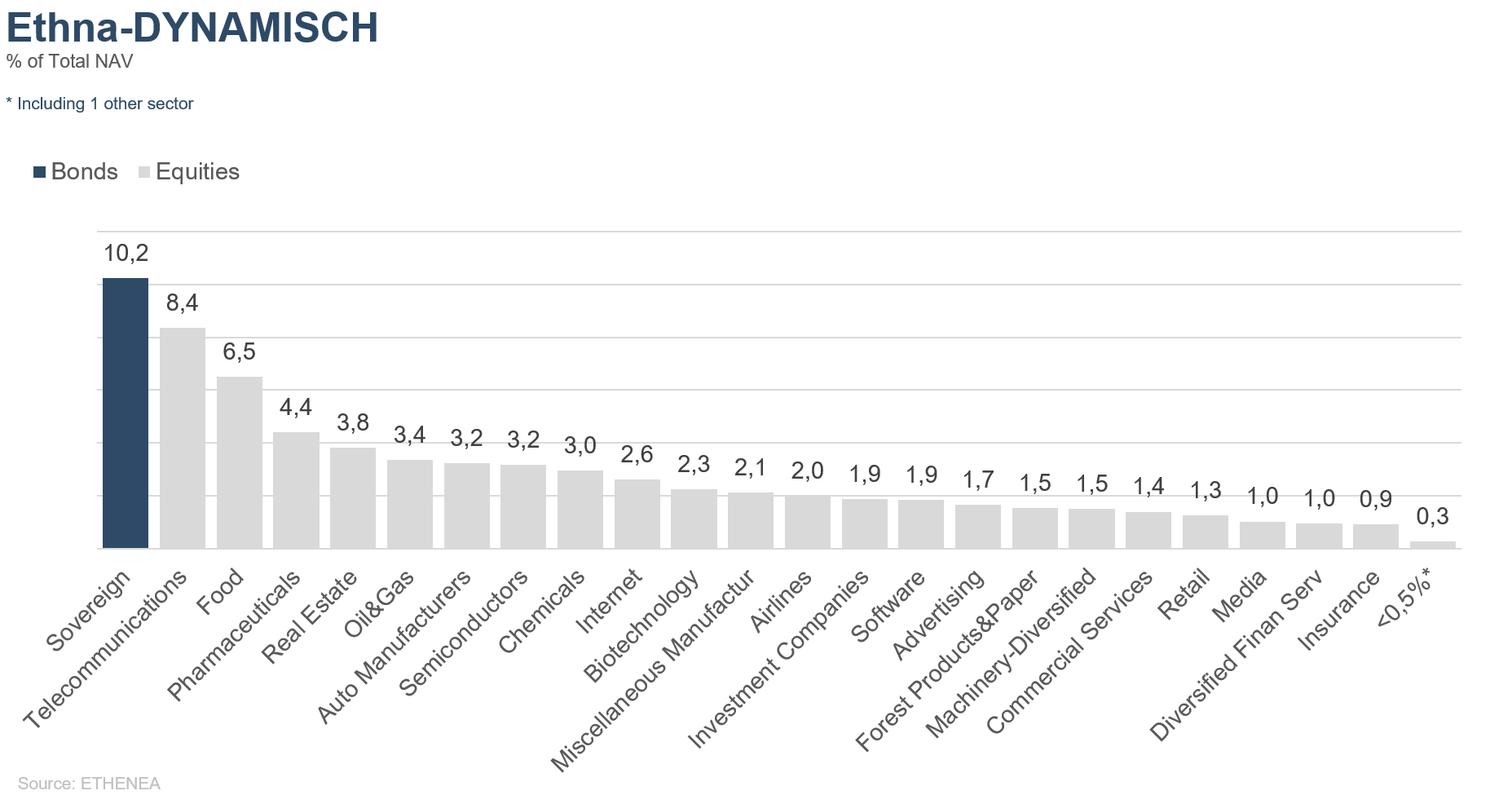 Equity markets with potential: China and US

Michael Blümke, one of the Lead Portfolio Manager of the Ethna-AKTIV, explains the chosen approach for the fund given the current late phase of the equity market economic cycle.

In an increasingly challenging environment, fundamentals remain crucial for our portfolio composition. In his video, Thomas Herbert, Head of Portfolio Management, looks at the signals that macro data, financing conditions and corporate profits are currently sending.

Fin de siècle conjures up an image of the end of an era. Although a recession is not yet on the horizon, in our Market Commentary Guido Barthels looks at the signs that an end is nigh and points out the differences between economic development in the U.S. and Europe.